A comprehensive list of applications using Circuitscape has been compiled in this document.

Circuitscape has rapidly become the most widely used connectivity analysis package in the world. It is used by numerous state, federal, and local agencies in the USA, and by government ministries and NGOs for conservation planning on six continents. It routinely appears in journals like PNAS, Nature Genetics, Ecology, Ecological Applications, Ecology Letters, Landscape Ecology, Evolution, Heredity, Bioscience, Molecular Ecology, Conservation Biology, and many others. In 2015 alone, Circuitscape appeared in 80 peer-reviewed journal articles—a 40% increase from 2014—plus dozens of dissertations, reports, and book chapters.

A Sampling of Circuitscape Applications from Around the World

Within the Nature Conservancy, connectivity analyses using Circuitscape are being used in planning exercises affecting tens of millions of dollars for land acquisition, restoration, and management. Other NGOs, whether small ones like the Snow Leopard Conservancy or large ones like the Wildlife Conservation Society, are using Circuitscape to set conservation priorities. Here are some recent examples of research in this area. 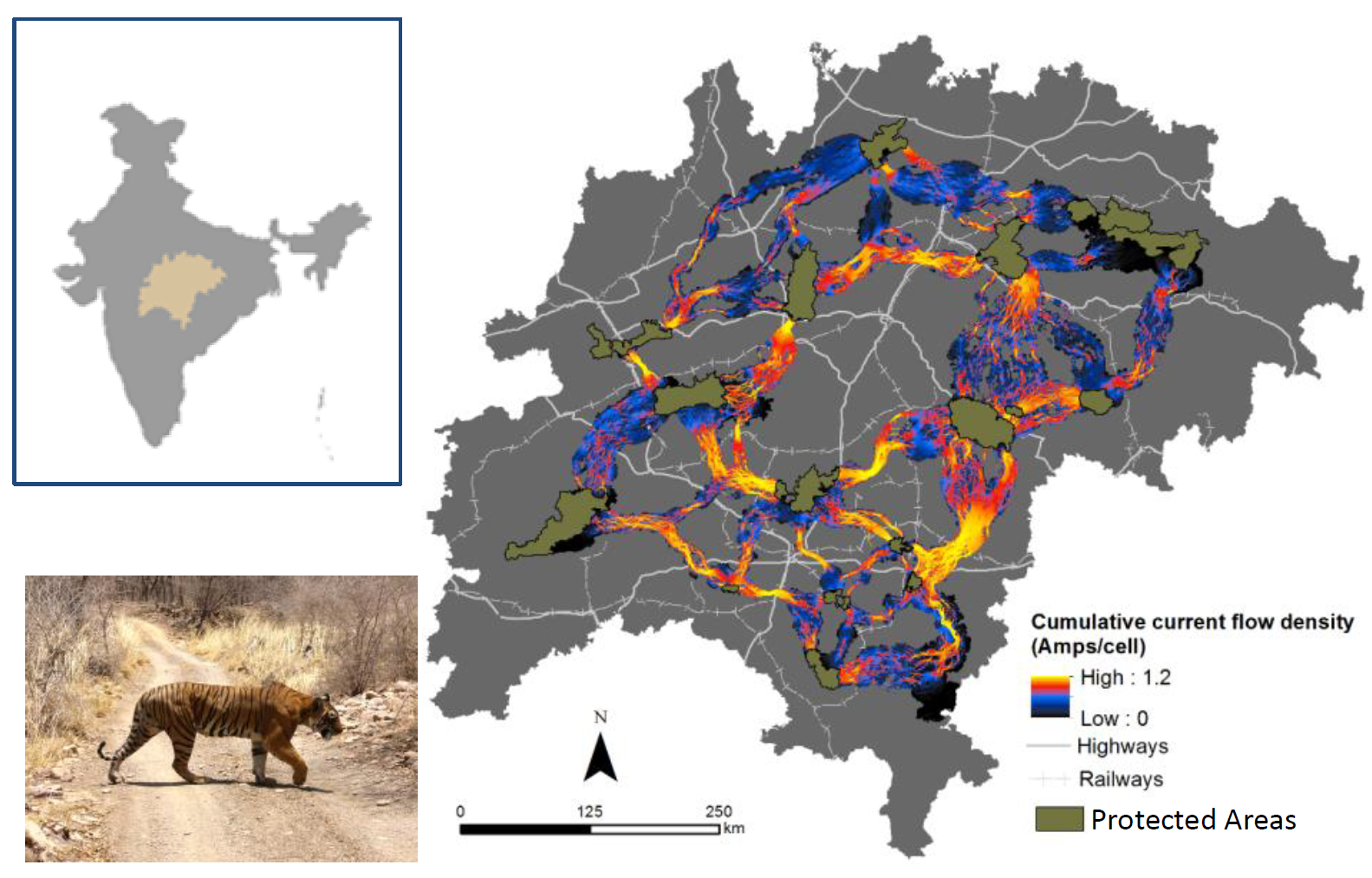 Landscape genetics is the study of how landscape pattern (the distribution of suitable habitat, barriers, etc.) affects gene flow and genetic differentiation among plant and animal populations. Circuitscape is widely used in this field, and has been combined with genetic data to show

Circuit theory can also be used to predict movements of animals and how these affect overall population connectivity. As with landscape genetics, this application is tightly tied to conservation planning. Examples include 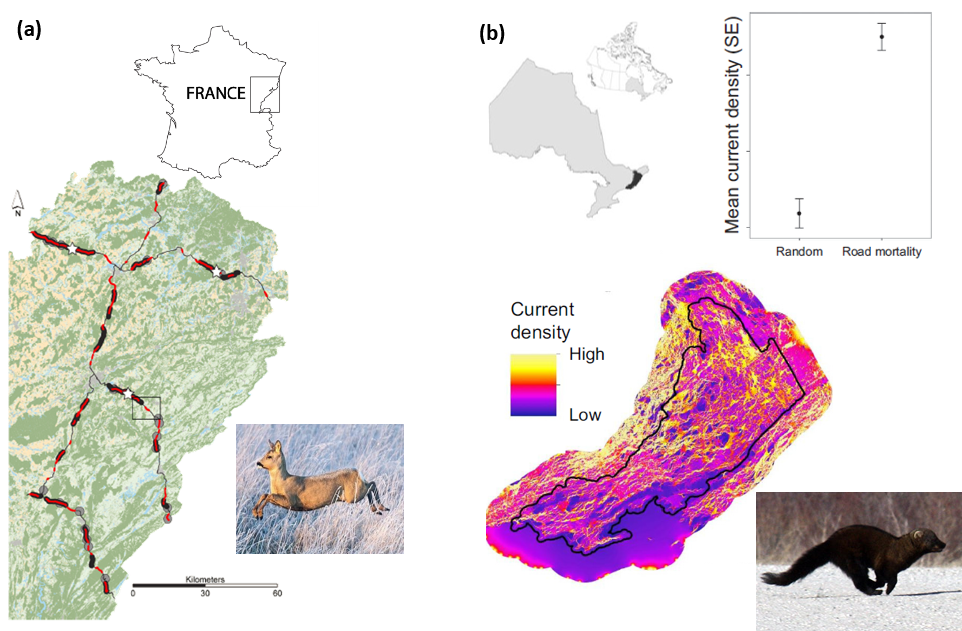 Circuit theory is being used to mitigate road impacts on wildlife and improve driver safety in at least six countries. (a) Circuit theory (implemented using Graphab) outperformed other connectivity models for predicting vehicle collisions with roe deer in France (Girardet et al. 2015). (b) A wall-to-wall connectivity map created using Circuitscape was highly correlated with road mortality for amphibians and reptiles and habitat use by fishers in eastern Ontario, Canada (from Koen et al. 2014). Similar methods are now being used across Ontario and in many other parts of Canada.

Predicting important areas for range shifts under climate change is an exciting new application of Circuitscape. One of the most important ways species have responded to past climatic changes has been to shift their ranges to track suitable climates. Rapid warming projected for the next century means many species and populations will need to move even faster than in the past or face extinction. Many species are already moving in response to rapid warming, but they are encountering barriers—like roads, agricultural areas, and cities—that weren’t present in the past. In order for species to maintain population connectivity and the ability to adapt to climate change, we need to identify and conserve important movement routes. Here are some ways Circuitscape can be used to address this need: 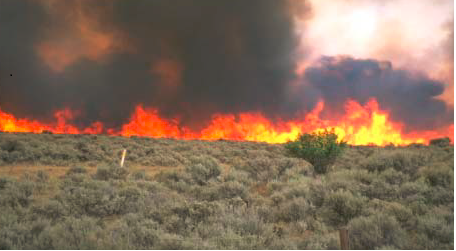 How Circuitscape Complements other Models

Circuitscape isn’t the right modeling method for every connectivity application, but it is strongly complementary to others, and often works well in conjunction with other methods. For example, McClure et al. (2016) compared least-cost paths and Circuitscape for predicting elk and wolverine movements using GPS-collared animals. They found that Circuitscape outperformed least-cost paths for predicting wolverine dispersal, but slightly underperformed them for elk. This makes sense, because circuit models reflect random exploration of the landscape, and dispersing juvenile wolverines are making exploratory movements since they do not have perfect knowledge. Elk, on the other hand, are following routes established over generations, and have much better knowledge of the best pathways.

New hybrid methods are taking advantage of both circuit and least-cost methods. In their tiger study, Dutta et al. (2015) combined least-cost corridors and Circuitscape to map the most important and vulnerable connectivity areas connecting tiger reserves. And in their work on invasive mosquitoes, Medley et al. (2014) found that circuit and least-cost-based analyses complemented each other, with differing strengths at different movement scales and in different contexts. Using the two models in concert gave the most insight into mosquito movement and spread. Other papers that combine methods, taking advantage of different strengths for different processes and scales, include Rayfield et al. (2015), Lechner et al. (2015), Fagan et al. (2016), and Ziółkowska et al. (2016).

Blair ME, Melnick DJ. 2012. Scale-dependent effects of a heterogeneous landscape on genetic differentiation in the Central American squirrel monkey (Saimiri oerstedii). PLoS ONE 7.

Heller NE, Zavaleta ES. 2009. Biodiversity management in the face of climate change: A review of 22 years of recommendations. Biological Conservation 142:14–32.

Joshi A, Vaidyanathan S, Mondo S, Edgaonkar A, Ramakrishnan U. 2013. Connectivity of tiger (Panthera tigris) populations in the human-influenced forest mosaic of central India. PLoS ONE 8.

Simon JA et al. 2014. Climate change and habitat fragmentation drive the occurrence of Borrelia burgdorferi, the agent of Lyme disease, at the northeastern limit of its distribution. Evolutionary Applications 7:750–764.